Blacktop Sky shows what happens when people push and break the boundaries between bystanders and active participants, between ourselves and "others," and what happens when what we don't do and say pushes our story further than the things we actually do.

"Working with this talented cast has re-energized me as a director and a writer,  and helped me remember why I do the things I do. The passion each person brings to their role and to the play as a whole is palpable and something Angels audience members won't soon forget." Director Jillian Carter

"Christina Anderson’s Blacktop Sky serves as a mirror for issues in our society surrounding homelessness, police violence, relationships and above all, empathy." - San Diego Voice and Viewpoint

"[...] as compelling and persuasive as it is adroit." - San Diego Story 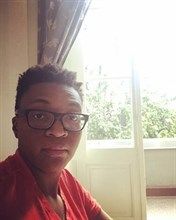