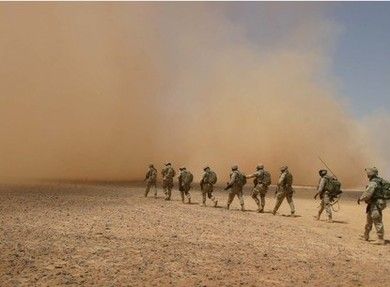 Timothy Scholl directs this reading of Jennifer Blackmer's script Human Terrain. Mabry Hoffman, an athropologist with The Human Terrain System, a real military initiative that embeds social scientists with combat units in Iraq and Afghanistan, is caught in the middle of an ethical dilemma as she tries to help a new friend.

Jennifer Blackmer is the 2015 PEN/Laura Pels International Foundation for Theatre Emerging American playwright. Based in the Midwest, she is an Associate Professor of Theatre and Director of Immersive Learning at Ball State University. Her plays have been seen in New York, Los Angeles, Minneapolis, Indianapolis, Berkeley and St. Louis, and includeHuman Terrain (The Lark, Mustard Seed Theatre, 5th Wall Theatre, IAMA Theatre Company), Unraveled (Theatre Unbound, Nashville Repertory Theatre), Alias Grace (Illinois Shakespeare Festival) andDelicate Particle Logic (Indra’s Net, The Playwrights’ Center, Break-a-Leg Productions at CUNY Graduate Center, NYC). Unraveled was named one of the ten best productions in the Twin Cities by Lavender Magazine, and Jennifer was lauded for superior achievement in playwriting. Her work has been a finalist for the David Charles Horn Prize for Emerging Playwrights (Yale Drama Competition), the Fratti-Newman Political Play Contest, the Firehouse Festival of New American Theatre, the O’Neill National Playwrights’ Conference and a semi-finalist for the Princess Grace Award and the Shakespeare's Sister Fellowship. She is currently developing Human Terrain as a motion picture with B Powered Productions in Los Angeles. Recent directing credits include the American premiere of Lost: A Memoir at Indiana Repertory Theatre, and numerous productions at Ball State University.