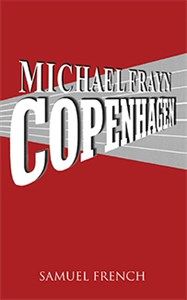 In 1941, German physicist Werner Heisenberg went to Copenhagen to see his Danish counterpart, Niels Bohr. Together they had revolutionized atomic science in the 1920s, but now they were on opposite sides of a world war. In this incisive drama by the prominent British playwright which premiered at the Royal National Theatre in London and opened to rave reviews on Broadway (ultimately winning the 2000 Tony Award for Best Play), the two men meet in a situation fraught with danger in hopes of discovering why we do what we do.

"The most invigorating and ingenious play of ideas in many a year. An electrifying work of art. - The New York Times, Read More

"The word 'tremendous' is often used but seldom deserved. In this case it is. Copenhagen is an intellectual and theatrical tour de force." - London Times