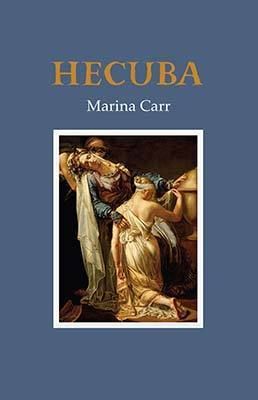 THE STORY: Troy has fallen. It’s the end of war and the beginning of something else. Something worse. As the cries die down after the final battle, there are reckonings to be made. Humiliated by her defeat and imprisoned by the charismatic victor Agamemnon, the great queen Hecuba must wash the blood of her buried sons from her hands and lead her daughters forward into a world they no longer recognize. Agamemnon has slaughtered his own daughter to win this war. But now another sacrifice is demanded…In a world where human instinct has been ravaged by violence, is everything as it seems in the hearts of the winners and those they have defeated?

“Marina Carr’s play is clearly intended as a corrective to Euripides, who portrays Hecuba as an enraged avenger. The result is eloquent and intelligent…” —The Guardian (UK). “The Irish dramatist Marina Carr contends…that, in general, Western culture has been too hard-eyed about the woman who was its queen when Troy so hideously collapsed. She offers a counterbalance to the ‘bad press’ Hecuba has copped (with Euripides transforming her into a scheming wild dog of revenge for the atrocities she suffered) in this beautiful, terrifying, almost uncannily eloquent play.” —The Independent (London). “Carr has imbued the characters’ rhetoric with passion and a brisk immediacy.” —Evening Standard (London). “Marina Carr’s stunning new version…teases out the barbaric aftermath of the fall of Troy, while also presenting it as a metaphor for the modern day plight of those dispossessed by warfare—especially women and children.…unusual and challenging…” —The Stage.

HECUBA was first presented by the Royal Shakespeare Company at the Swan Theatre, Stratford-upon-Avon on September 17, 2015.