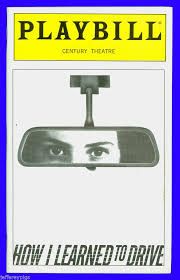 THE STORY: A wildly funny, surprising and devastating tale of survival as seen through the lens of a troubling relationship between a young girl and an older man. HOW I LEARNED TO DRIVE is the story of a woman who learns the rules of the road and life from behind the wheel.

Winner of the 1998 Pulitzer Prize. Co-winner of the Susan Smith Blackburn Prize. Co-winner of the 1998 Lucille Lortel Award for outstanding play. "Ms. Vogel has written a lovely, harrowing guide to the crippling persistence of one woman's memories." —NY Times. "…HOW I LEARNED TO DRIVE is a tremendous achievement, genuine and genuinely disturbing…This is, quite simply, the sweetest and most forgiving play ever written about child abuse…Vogel's delicate tactic makes sense not only as a way to redouble the dramatic effect, but as a representation of reality, a perfect case of the form fitting the subject." —Village Voice. "With subtle humor and teasing erotic encounters, Vogel addresses the dangerous intersections of teenage temptation. She also paints a richly poetic and picturesque landscape…The play is a potent and convincing comment on a taboo subject, and its impact sneaks up on its audience." —Variety. "…HOW I LEARNED TO DRIVE turns out to be a most compelling ride." —BackStage.

HOW I LEARNED TO DRIVE is presented by special arrangement with Dramatists Play Service, Inc., New York.

HOW I LEARNED TO DRIVE received its world premiere at the Vineyard Theatre, New York City.
Off-Broadway production produced by the Vineyard Theatre in association with Daryl Roth and Roy Gabay.
This play was made possible by generous support from the Pew Charitable Trust and the John Simon Guggenheim Foundation.
It was written and developed at the Perseverance Theatre, Juneau, Alaska, Molly Smith, Artistic Director.